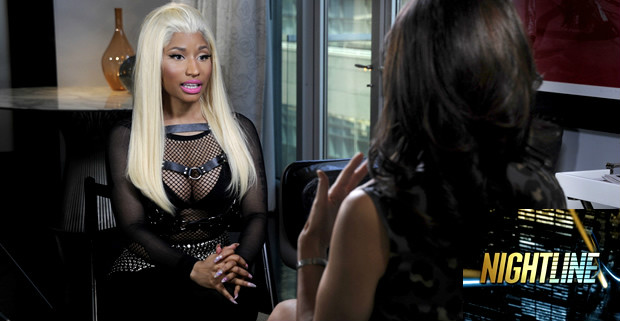 Well She's wrapped alongside Kanye West, Will.i.am & Madonna these days everyone wants a piece of Nicki Minaj her latest album Pink Friday: Roman Reloaded Debuts #1 on iTunes & with nearly 11 million followers on twitter she edge out Eminem as one of the hottest rapper in the game. In this interview with Nicki Minaj on Nightline, ABC's JuJu Chang explains why she compare herself to Lady Gaga, her song "Super Bass" sing with Sophia Grace and much more controversy about her along the way.

Young Money queen Nicki Minaj sat down with ABC’s Juju Chang for an insightful interview on ‘Nightline’ on Monday (April 9th) - During the six-minute chat, Her Minajesty talks the annoying Lady Gaga comparison, (“She’s paved her way. She’s opened her own lane, but I feel like I have my own lane and we never cross…ever!”, replied Nicki), the nip-slip on ‘Good Morning America’ months ago, Juju (love her name!) also quizzed Nicki if parents should worry about their kids watching her performances, and finally 29-year-old rapper opened up on her difficult childhood of living with an abusive father. Watch the full interview below! Remember Nicki’s new album “Pink Friday: Roman Reloaded” is in stores NOW.
Posted by Ryan Ngala at 4:16 PM